Developed and curated by Sabrina Maggiori

The FLIM project was developed in response to a call for proposals by Regione Marche (regional government body) that sought for innovative ways to promote knowledge of the region and its heritage, and to advance its cultural, naturalistic, and economic potential. The decision was made to develop a communication tool with unique features. A product of both art and handicraft, halfway between a book and an animation clip, something to experience playfully: the flipbook.

Six thematic areas of touristic interest were selected among those shortlisted by the regional government body. A flipbook was then created for each theme, each flipbook made by a different artist. Potential contributors were evaluated in a holistic perspective and selected due to their capacity to contribute a unique style, technique, and creative vision. This resulted in a diverse group, including 3 Marche-born authors, 2 international artists, and an artist from Rome, who was approached for the project after a nationwide call for contributions hosted by the town of Fabriano.

Beatrice Pucci was called upon to give her interpretation of the parks and outdoor pursuits theme. She did so by paying homage to the yew tree located near the Fonte Avellana monastery. This yew tree (Tassus Baccata L.) was revealed by a 2012 census to be the largest and oldest in the Marche region. One of the most impressive specimens in Europe, with its 4,75 metres of circumference, the tree falls short of the national record by just a few centimetres. In the flow of images, bringing one closer and closer to the centuries-old bark, to the tree’s life, man enters in a silent dialogue with nature, in a state of complete symbiosis.

Visual artist Valerio Giacone won the nationwide call for submissions for the “genius of Marche” theme. The task was to interpret, in flipbook format, the relationship between the city of Fabriano and its paper-making industry throughout history. A bond so close, that it became one of the main factors behind the city’s 2013 inclusion in the UNESCO Creative Cities network, a recognition of its tradition of handicraft, arts, and folklore. The flipbook sets out from one of the oldest existing sheets of watermarked paper and goes on to encompass other themes. A soft line, within a delicate, exquisite work on the material, makes it possible for the beginning and the end to coincide.

Marche-born comic book illustrator Maicol & Mirco was given the task of portraying - in his signature witty, dry style – the town of Offida, which he knows intimately, and specifically the old and cherished tradition of the Carnival. This falls into the “gentle hills and medieval hamlets” thematic area. Snakes, horns, and fires appear on Gli Scarabocchi’s usual red background, living symbols of a tradition still going strong to this day, elements of identity suggestive of the contact and commixture between pagan and catholic culture. One of the most striking experiences in the whole region.

Roberto Catani, Jesi-born animator, winner of several international awards, approached the “made in marche” theme by meeting La Distesa, a winery and agricultural estate that uses organic farming methods, mindful of the well-being of the vines and the surrounding countryside. His flipbook is a multi-layered work, displaying the artist’s customary, refined composite technique. This includes, among other things, scratching the paper and employing a variety of colouring substances. The result is a poetic tracking-shot that moves from particulars, expanding into a wide shot, a bird’s eye view of regularly aligned vines.

Chintis Lundgren, Estonian-born animator currently living in Croatia, delved into the “Marche in blue” thematic area. With her signature lightness and oddball style, she chose to tell the story of a small anthropomorphic mosciolo (mussel), who sets off on an adventure along the Monte Conero coast. By letting the waves take him from one cove to the next, he provides an unusual perspective on the wonders of this scenic corner of the Marche. Mosciolo is the vernacular name of the wild mussel, one of the region’s most beloved delicacies and a Slow Food Presidium, whose only breeding ground is a small strip of coast in the province of Ancona, extending from Pietralacroce down to the border between the municipalities of Sirolo and Numana, with the bay of Portonovo at its centre.

Russian-born animator Maria Stainmetz, currently a Berlin resident, was chosen as the illustrator for the “spirituality and meditation” thematic area. Her work centres on the Basilica of the Holy House in Loreto and the black Madonna enshrined within, one of the most significant pilgrimage sites of the catholic world. After taking a trip to Italy to familiarize herself with the location, she came up with a twin set of visual narrations for her flipbook, the only one that can be “read” in either direction. Her digitally drawn images aim to convey a message of love transcending the earth: a cosmic love. Sacred elements turn into everyday objects, while terrestrial elements come into contact with interplanetary space. The unifying thread is the gift of life, and the baby – a creature coming from afar – is to be welcomed in his unicity.

Our approach to developing the project’s visual identity goes in parallel to the flipbook’s accessible, playful presentation of content. The acronym FLIM (from FLI-pbook M-arche) is scaled in proportion to the chosen flipbook format, while the logotype is given its character by subtracting the area ideally occupied by the thumbs, when handling this kind of booklets.

An offshoot of the FLIM FLIPBOOK MARCHE project, the exhibition showcased a selection of original drawings from the three projects that were put on paper by the authors: Roberto Catani, Valerio Giacone, Maicol & Mirco. It was launched in Italy at the Piccolo Festival Animazione, an international animation festival directed by Paola Bristot in San Vito al Tagliamento, Pordenone. 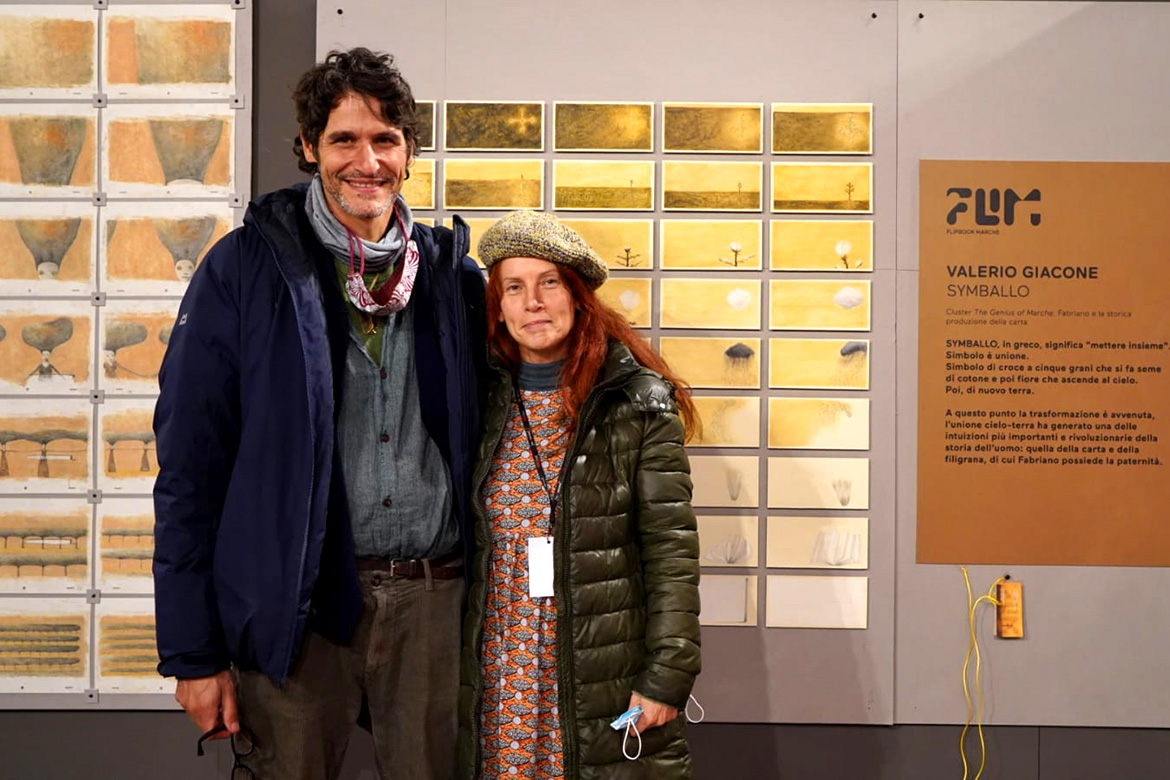 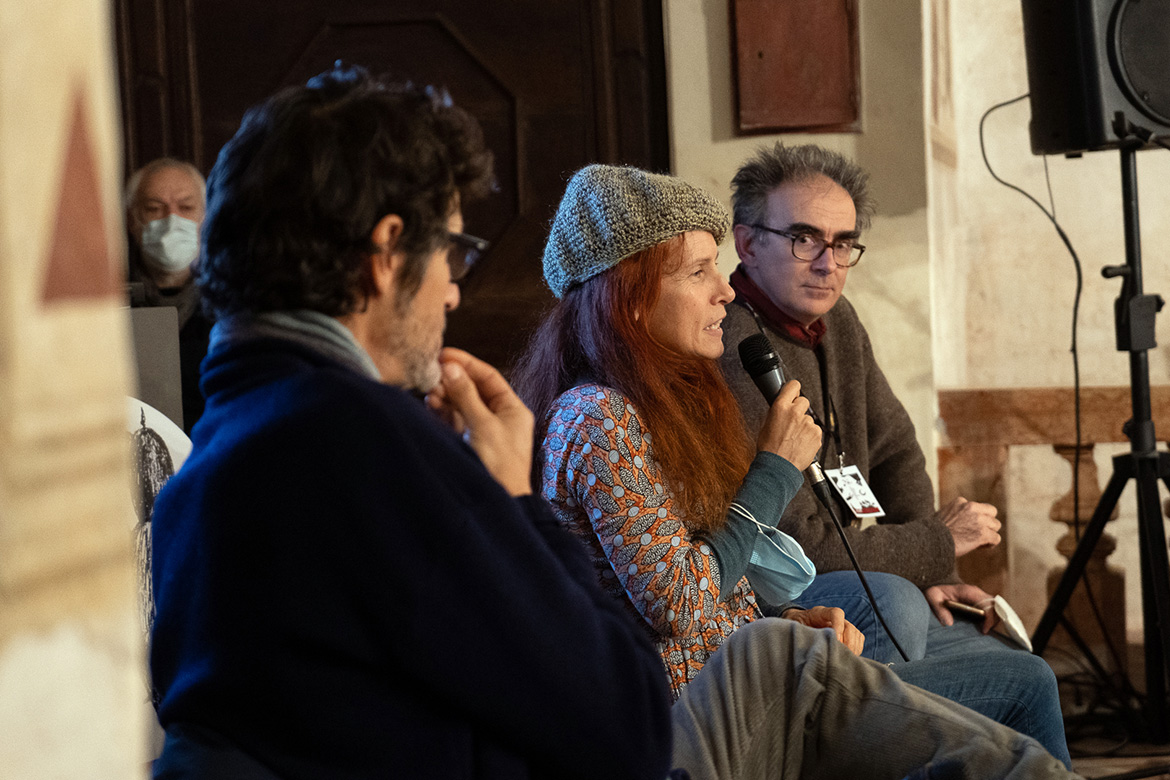 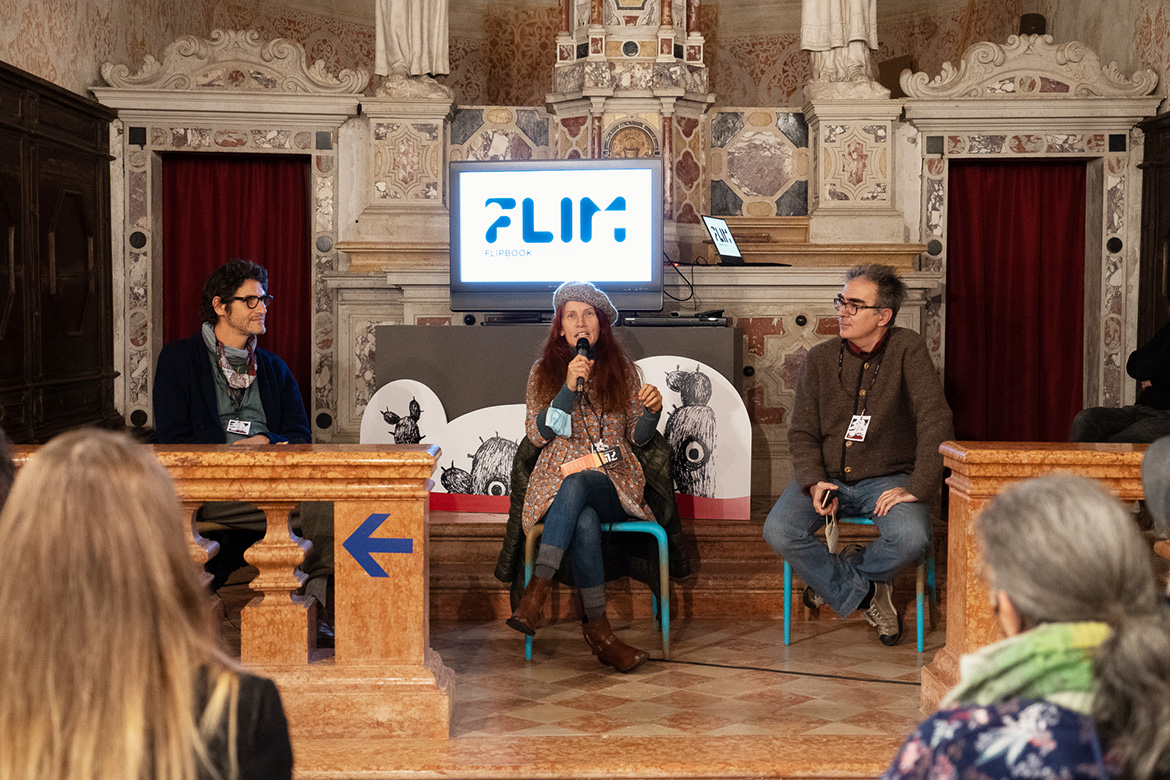 In concentric circles life gurgles, protected by a woody armor. Faces are lost in the slow passage of time, a moment later they are unrecognizable, liquid within the context that encloses them. Attention is our prayer, attention is the beauty of waiting for nothing. Tribute to the monumental badger, silent inhabitant of Mount Catria.

My topic for the flipbook was "Brands in blue", so I decided (with some suggestions from the organizers) to invent a story about the local mollusk, called mosciolo. In my story, the little anthropomorphic mussel ventures into the area coast of Monte Conero, letting the waves carry it from one beach to another. It was fun getting to know the mosciolo and take a virtual walk from La Vela to the church of Santa Maria.

Offida is wrapped in a snake. Offida is between the horns of an ox, a fake ox. Offida is the fire in the city. Offida is the carnival, one of the oldest human institutions. It seemed right to make these ancient ingredients dance together.

I was very happy about the proposed topic "Loreto" in project frame FILM FLIPBOOK MARCHE and about the possibility to visit this beautiful town. I was inspired by splendor of Basilica della Santa Casa. Its magnificent stucco, sculpture and frescoes are telling fantastic stories. For my work I choosed the central legend of the hous of Blessed Virgin Mary, how angels bringing it to basilika, and the famouse black Madonna. I was also very impressed by the modern frescoes dedicated to the patronage of the Madonna of all flying. They are like a bridge from past to now, demonstrating us the actuality of the story.

Telling the process of wine production, in a few animated drawings, means telling in a temporal space very short a very long job. To enclose the slow work of the vine and that of the man who takes care of it, in respect for its times and the land that welcomes it, it seemed to me that the only way forward was to unravel the a succession of events in a backwards overview, from the detail, the branch, to the total field, the vineyard, from the work in the fields, evoked by the scratches of the first drawings, to the composed linearity of the rows in the overall view that closes the flipbook.

THE GENIUS OF MARCHE

SYMBALLO, in Greek, means "to put together". Symbol is union. Five grain cross symbol that becomes cotton seed e then flower that ascends to heaven. Then, land again. At this point the transformation took place, the heaven-earth union generated one of the most important and revolutionary intuitions in human history: that of paper and watermark, of which Fabriano owns paternity.

Making flim out of paper!